Resolution of the teleconference "I-st Interdisciplinary Collegium of Neurological Diseases" 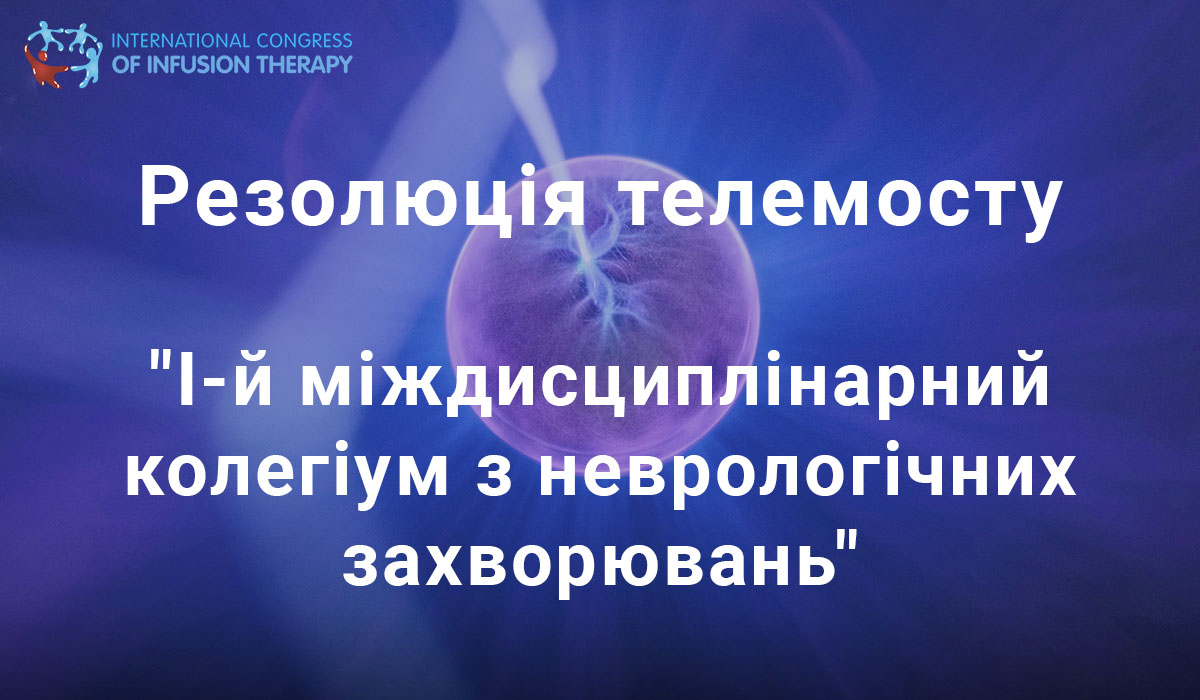 Almost 6 000 health care specialists have registered to participate in the “I-st Interdisciplinary Collegium of Neurological Diseases” which was held on June 3, 2021.

The leading experts of the country have shared their practical experience within the framework of the event.

Interdisciplinary format of the Teleconference was assured by involvement of speakers from different special fields, such as: neurologists, anesthesiologists, cardiologists, infectious disease specialists.

Twelve main reports were offered to the participants for review and discussion and they were dealing with the following issues:

1. A stroke is a clinical syndrome of rapid development of signs of focal and global loss of brain functions lasting 24 hours and more or resulting in death in absence of any other (non-vascular) reasons. Brain stroke is one of the most important issues in modern medicine. Every year, more than 120,000 brain strokes occur in Ukraine. Stroke remains the major cause of disability in the country. Only 10-20% of patients after stroke return to a full life.

2. According to the current Protocol, treatment of patients with acute stroke consists of baseline therapy, aimed at stabilization of severe patients, correction of those disorders that may complicate the restoration of neurological functions and specific (differentiated) drug therapy, in particular, thrombolytic therapy, anti-platelet therapy, treatment of cerebral edema and correction of ICP (drug therapy, surgical decompression).

3. Edaravone, an ischemic cascade blocker, is recommended as a medicinal drug for intravenous administration to patients with acute ischemic stroke of the brain. In accordance with the instructions for the medical use of the Drug (Xavron®), in the acute stage of brain infarction Xavron® demonstrates protective action, inhibiting the occurrence and development of ischemic cerebrovascular disorders, such as:

4. According to provisions of the Methods for developing and implementing of medical standards for medical care based on evidence-based medicine, approved with the Order of the MoH of Ukraine dated 28.09.2012 №751 (hereinafter referred to as the Methods) Ukrainian doctors in daily practice may be guided by sources of clinical directions, published in annex 4 of the Methods, in particular by information from the Cochrane Database of Systematic Reviews. Assessment of efficiency and safety of Edaravone in acute ischemic stroke is described in the Cochrane Reviews which are source of clinical directions and may be used by doctors during their medical practice. Based on this assessment in the Edaravone group there was an increase in the portion of participants with a significant neurological improvement in comparison to the control group, and the difference was substantial. Edaravone therapy demonstrates twice as good result as a baseline therapy on the Rankin scale.

5. The safety, tolerance and pharmacokinetics of Edaravone in patients with acute ischemic stroke were evaluated in a double blind placebo-controlled randomized study of M. Kasteetal (2013). The study was conducted in nine research centres in Finland, the Netherlands and the United Kingdom. The side effects associated with treatment were mostly mild or moderate, as well as transient. No abnormalities were found in the vital signs, ECG data and CT results. The study also found no side effects associated with renal dysfunction.

6. Based on the findings of 28 multi-center randomized placebo-controlled double blind studies and 2 meta-analyses, published on one of the largest online collection of published scientific researches «PubMed», Edaravone’s therapeutic strategy is effective for the treatment of acute ischemic stroke, improves the prognosis for these patients and demonstrates a higher degree of functional independence.

7. Sub-analysis of Japanese RESCUE registry data on the impact of Edaravone on patients with acute occlusion of large cerebral vessels (1 442 patients); Prospective cohort study PROTECT 4.5 (11 126 participants) with assessment of Edaravone administration as monotherapy and in combination with alteplase (tPA); Retrospective observational study using national administrative database which is devoted to assessment of clinical effects of early administration of Edaravone in patients with acute ischemic stroke who were subjected to endovascular reperfusion therapy (in total 11 508 patients), in total 24 076 participants, demonstrated:

8. The CTSX study (Concomitant Therapy of Stroke with Xavron) - an open-label multicenter case-control study conducted on patients with acute ischemic stroke within the first 72 hours after onset of a disease. Edaravone was administered in dose 30 mg twice a day within 14 days. Upon discharge and 3 months after the onset of the disease, the functional result was evaluated using a modified Rankin scale. A significant improvement of the functional result was observed in the Edaravone group upon mRS scale (р < 0,001).

9. According to the results demonstrated in these sources a significant international practice of administration of Edaravone in general and of the Drug in particular based on results of the CTSX study with assessment of immediate and long-term results indicates favorable effect of treatment of patients with acute ischemic stroke.

10. Ischemic stroke is a major complication of atrial fibrillation (AF). A study was conducted to assess the impact of citicoline and electrolyte therapy on the level of circulating neuro-specific protein markers in the serum of patients with ischemic stroke and AF. In both groups neuronal and glial marker levels in the serum were determined, including glial fibrillary acid protein (GFAP), neurofilament light proteins (NF-L), myelin basic protein (MBP) and ionized calcium-binding adapter molecule 1 (Iba1), before and after treatment. The additional treatment with the combination of electrolytes and citicoline significantly reduced the levels of neuronal and glial markers compared to the initial values, while control group patients hardly had any significant changes of the studied indicators. The received results indicate that the therapeutic benefits of citicoline and electrolytes in patients with ischemic stroke and AF can be mediated by increasing of neurons viability, protecting against axon damage, reducing of reactive Astrogliosis, preventing disruption of BBB integrity and reducing of demyelinization.

11. Endothelial dysfunction of cerebral vessels plays a key role in the development of cerebrovascular pathology, as well as the role of other changes such as stenosis, thrombosis, embolism and occlusion of extracranial and intracranial vessels. The amino acid L-arginine is an important base substrate for the synthesis of vascular NO. According to enantiomers and racemates theory, it is left-rotatory isomers that provide maximum bioavailability and clinical efficiency. The addition of L-arginine in the early recovery period to standard acute ischemic stroke therapy helps to restore the vasodilatory mechanisms of cerebral blood flow autoregulation and increases the efficiency of cerebral endothelium functioning.

12. Three syndromes are identified in the post-covid period as trigger mechanisms for development of complications: endotheliitis is a vessel wall damage accompanied with clotting and microcirculation disorders which in its turn leads to thrombus formation; Systemic background inflammation, which is formed by elevated levels of cytokines and indicates the continuation of the inflammatory process after recovery; pulmonitis is a lung injury during СOVID-19 caused by damaging of vascular endothelium and alveolar complex by virus and cytokines. In the clinical picture the asthenic syndrome comes to the fore.

13. The syndromic and pathogenic approach to rehabilitation of patients is focused on: elimination of the system background inflammation with Edaravone; improvement of endothelial function with combination of L-carnitine and L-arginine; reduction of asthenia signs with a xylitol-based solution which is a source of energy with insulin-independent metabolism that provides effective energy support. The syndromic and pathogenic approach "Long-hauler" is a rapid return to normal life of patients with post-covid syndrome.

14. In case of the most frequent post-covid psychiatric disorders, such as: anxiety, depression, sleeping disorders, and cognitive deficit it is recommended to consider pharmacotherapeutic correction in the form of Ethylmethylhydroxypyridine succinate (Lodixem®), which eliminates anxiety in the post-covid period, restores sleep, improves cognitive function, and combination of citicoline and electrolytes that contributes to improvement of the brain function and condition in case of cognitive, sensitive and motor disorders and decreases the level of amnesia.

The text of the resolution was signed by Serhiy Moskovko, The President of the NGO «Ukrainian Society of Stroke Medicine”, Professor, MD, PhD.

Didn’t see all the reports? View the video recording of the conference:

Have you registered for our events before?
Subscribe to VIBER-BOT ‘Infusiontherapy’ – get up-to-date information, interesting announcements and news on the topic of infusion therapy!