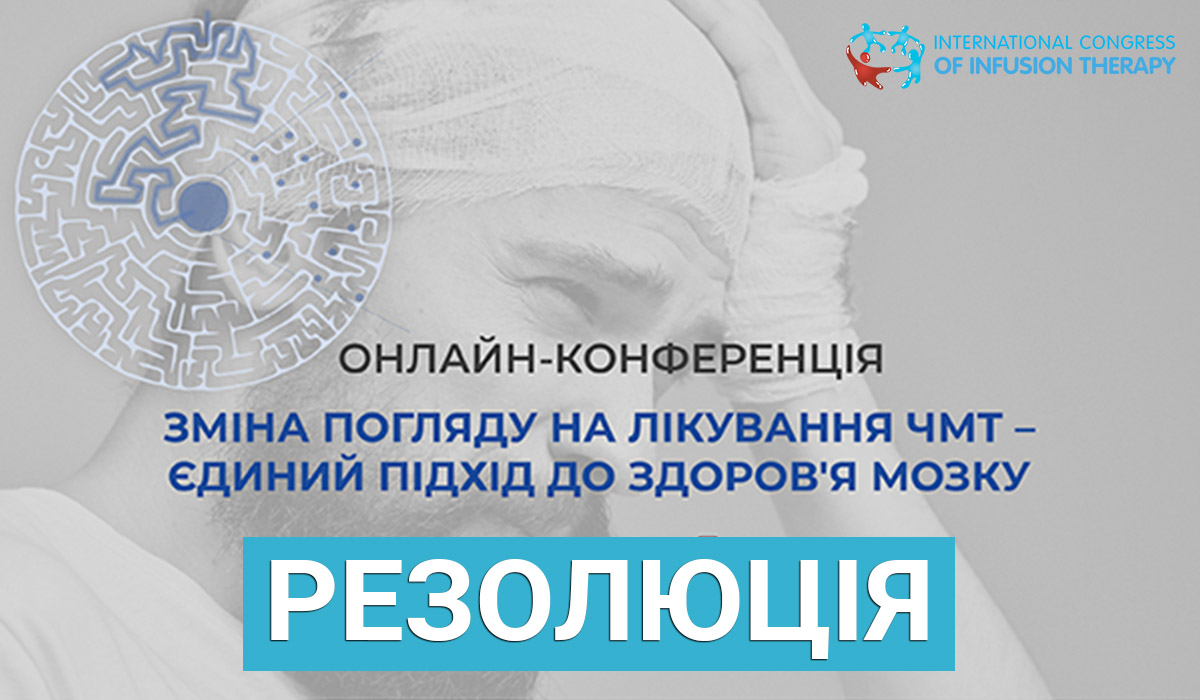 Almost 5 000 health care specialists have registered to participate in the Teleconference "Changing the view of the treatment of TBI - a unified approach to brain health", December 6, 2022, Kyiv, Ukraine.

The teleconference was held in a multidisciplinary format and brought together doctors of various specialties: neurosurgeons, anesthesiologists, neurologists, general practitioners and family doctors.

The purpose of the teleconference is to inform the participants on management of medical aid to patients with mine-blast and civil traumatic brain injury with focus on treatment and diagnostic activities, as well as recognition, prevention and minimizing of delayed and long-lasting consequences of traumatic brain injury.

Six reports were offered to the participants for review and discussion and they were dealing with the following issues:

Conclusions and decisions after the discussion of reports:

1. Traumatic brain injury is a condition that occurs due to traumatic lesion of brain tissue that is formed by a neurovascular unit (further referred to as NVU), which is a united interrelated anatomic and functional complex represented by the nerve tissue (neuron, glia) and microcirculatory junction (pericytes, endothelial cells and vascular smooth muscle cells).

2. TBI is one of the main reasons of death and disability. In Ukraine, before the start of the full-scale invasion, the number of such incidents amounted to 120,000 a year, and with the onset of active hostilities in the country, the number of such incidents doubled. The total number of cases worldwide is underestimated, given that many minor TBIs remain undetected, untreated and unrecorded due to the absence of a national TBI registry.

3. In 2019 the report of the STAIRX Consortium was published. According to this report “neuroprotection” is a wrong approach, as far as it doesn’t take into account all types of brain cells sensitive to damaging or death. So it was recommended to replace the term “neuroprotection” with “brain cytoprotection” for more correct description of the purpose to protect all components of the NVU. So, the modern concept indicates the need to protect not neurons but the NVU being a united structural and functional element of the brain tissue. One of the key mechanisms for development of the secondary brain damage is the ischemic (neurometabolic) cascade at TBI, which includes: excitotoxicity, changes in neurotransmitters, oxidative stress, inflammation, sensitivity to delayed cell death of neurovascular unit. The ischemic cascade increases the severity, depth and area of the primary lesion of brain tissue.

4. The second equally key pathogenetic link is the risk of development of SIRS, which develops due to excessive production of proinflammatory cytokines and chemokines. Excessive production of proinflammatory cytokines can further affect the integrity of the blood-brain barrier (BBB) and result in damaging of brain tissue. SIRS is one of the main reasons for development of the multiple-organ-failure syndrome, as well as purulent inflammatory complications. Neuroinflammation plays a key role in the development of remote effects. Activated microglia has been shown to affect neuronal homeostasis, neuronal function, especially in subacute and chronic TBI periods. Thus, the protection of neurovascular unit is an important therapeutic goal in traumatic brain injury.

5. Despite the great interest of the scientific world to the problem of TBI, today many issues remain unresolved and require further study. In particular, there are no effective treatment protocols for TBI. The Ministry of Defense of the USA through «Warfighter Brain Health Initiative» has offered key principles for estimation and treatment of TBI, as well as for patient’s returning to full life:

6. These goals became the basis for development of the common approach to the brain health – the pathogenetic treatment scheme for TBI consisting of:

Given that the TBI is not a time-isolated event, but a condition that develops over time and can be burdened with long-term consequences, and edaravone is able to influence the pathogenetic mechanisms of the chronic evolution of brain damage, it is advisable to repeat treatment with the drug.

Chronic TBI effects are associated with persistent headache, vestibular dysfunction, depression, cognitive complaints. TBI of any complexity can lead to post-traumatic epilepsy, PTSD, neurodegenerative diseases, including Alzheimer’s and Parkinson’s diseases. Ischemic cascade and neuroinflammation contribute to the development of remote effects of TBI and remain outside of the management target of the traumatic brain injury. In order to prevent the development of the consequences of TBI, it is recommended to consider the application of a common approach to brain health in the distant and intermediate periods. In the intermediate period of TBI:

8. The mine-blast TBI is a separate traumatic impact on the brain, accompanied with lesion of the auditory and vestibular apparatus, analogues to which do not exist in the clinic of peacetime diseases. The diagnosis of TBI due to mine-blast trauma is often hampered by the late examination of the victim due to the difficulty of evacuation from the site of injury and the presence of other combined injuries. During the conference, the own experience of TBI management with the application of a common approach to brain health was presented. The addition of the pathogenetic regimen to the standard therapy contributed to a more pronounced treatment outcome than the standard therapy: there was a rapid normalization of the level of consciousness due to GCS, a regression of neurological deficiency, pronounced reduction of headache intensity by VAS, improvement of cognitive functions and reduction of astheno-neurotic manifestations.

9. The application of a common approach to brain health is promising, based on promising clinical results such as: preservation and recovery of cognitive and mental health, reduction or elimination of long-term and late-term effects of TBI, reduction of the risks of functional damage in case of repeated TBI.